A few years back, I discovered leadership coach Patrick Lencioni’s best-known book, “Five Dysfunctions of a Team.” Lencioni writes so-called business fables. They’re bright and breezy, perfect for someone like me who has the concentration of a hummingbird on TikTok.

They’re also insightful, but I have to admit to some initial skepticism about Lencioni’s first dysfunction: Trust.

Time has taught me, though, that Lencioni is right; trust is the foundation of team success. With trust, team members ask for help, they venture ideas, they call each other to task. Without trust, they’re not team members. They’re associates.

This was brought home to me again this week when one of our communities hosted an industrial development prospect. Normally, I consider myself chief sales dude. I prepare the materials. I handle the welcome. I make the first pitch.

But after testing positive for COVID-19 (anybody who says this illness is ‘no big deal’ has never taken a bite of pizza and tasted sawdust), I was relegated to the bench. Others would have to take the lead.

Down at the Corridor offices, Joanne Follon had already helped gather the critical data. Alyssa Petersen put everything together. Then our partners, utility reps and city officials, took over. While I was at home petting the dog, they were proving to the prospect company that the Corridor region is one of the best places to operate in the Upper Midwest.

They, of course, nailed it, and I never doubted they would. Partially that’s because I’m expendable and know it. But it’s also because we have a collaborative approach to economic development in this region that creates—you guessed it—trust. Everyone involved believes in the best intentions of the others.

There’s an easy contrast to draw here with national politics, the realm of intentional and unrelenting distrust. Let’s focus instead on the positive. Yes, the Iowa Lakes Corridor region is beautiful. Yes, it is rich in resources. Yes, workers here are productive and loyal. But perhaps our greatest differentiator is our ability to work together.

Here’s to being functional. 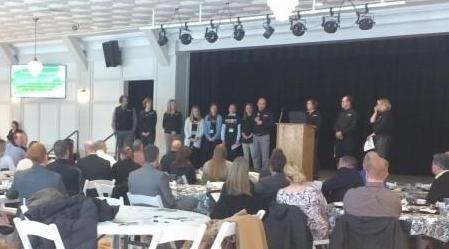